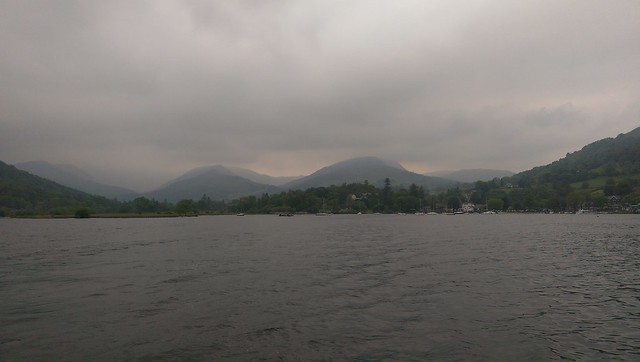 Swimming a mile in a freezing cold lake may not be at the top of most people’s bucket lists, but I’ve had my eye on the Great North Swim for five years.

I signed up to do it in 2010 but it got cancelled, due to blue green algae in the water. This was a blessing in disguise, as I’d only done a couple of training sessions and was pretty out of shape. My swimming partner Abby went up and swam in Windermere anyway. I stayed home and sat on my sofa, secretly relieved.

But it nagged at me and so, after a health scare last year (rare type of appendicitis + understaffed hospital = frightening brush with death) I decided to have another crack.

I was originally ‘just’ going to do the Great North Swim, but as I was hoping people might sponsor me to support a local charity for the homeless, it seemed like this wasn’t enough.

While I’m still 35 miles off my total, thanks to some down time this summer, I’m so glad I set myself that bigger goal, as it meant that when the big day in Windermere came around, unlike last time, I felt totally ready.

As well as all the miles at my local pool (including weekly coaching sessions), I had a new, better wetsuit (which I’d swum in already), I’d gone through enough pairs of goggles to know which ones fitted me perfectly and, most importantly, I’d worked on acclimatising to cold, open water.

The first time you swim in very cold water a couple of things happen. You start breathing rapidly, and everything seizes up. Then you discover that you’re cold, really cold, and you don’t feel like you can swim properly. Scary.

But the human body is an amazing thing. It adapts quickly. So I gritted my teeth for the first few practice sessions I did and by the time my final open water session came around (in beautiful crystal blue waters in a quarry near Bristol) I was used to the cold and knew that I could handle the Windermere temperatures.

In the acclimatisation pool in Low Wood Bay, while some of the other Great Swim entrants gingerly entered the water, complaining about the cold and shivering, I felt fine and dived under straight away, knowing that putting my whole face in was what would get me used to the temperature fast. What they were experiencing was what I’d gone through a month before, where the water feels like knives and ice, and your face feels like it’s on fire. There is no secret to acclimatising and I’m not some superhuman – I’d just taken the cold seriously and now it was paying off.

When we’d driven past the course the day before I’d looked at it and though ‘yep, that’s totally doable’. It wasn’t ego. It was practice. Practice works. I’d swum much further in the pool. I’d swum the distance in cold open water. I knew I could do it.

And so I found myself at the start gate at 11am, bouncing on the spot with excitement and raring to go. On the spot, I decided to start in the first wave. I’m not actually a massively fast swimmer. My times are respectable and in most leisure pools on most days I’m the fastest one in. But the guys at my Wednesday training sessions are way faster and I knew that I wasn’t going to stay at the head for long.

Still, starting in the front of a group of 350 people means that you are ahead of everyone who swims the same pace, or slower than you. So the claxon went off and I strode into the water, hit the start button on my Garmin Swim watch as I dove in, and headed left, to get out of the way of the big boys I knew would be faster than me.

For the first couple of hundred metres I lost my bearings. I know how to sight without inhaling water, but the kerfuffle all around me was pretty distracting and I veered a bit off course. I paused, took a breath (long enough for a safety crew member to ask me if I was OK), refocused and then cracked on. I wasn’t really getting overtaken, but my brain was doing me no favours, whirring around with thoughts like ‘I’m actually doing it, I’m doing the Great North Swim, I think I can do it, what if I don’t do it, arrrrrrg’. I needed to calm down.

One of the many great pieces of advice I’ve had about swimming is to breathe out hard under water. This gets waste air out efficiently and allows you to take a big gulp of oxygen on your next breath. So I did this for a bit, focusing on my breathing, and it sorted my head out. And then I just got on with it.

I didn’t go fast – I find it hard to kick in my wetsuit as it’s so buoyant, so I was pretty much pulling myself around on 95% arms only, but I was going steady and got to the half mile way quicker than I expected, especially bearing in mind that I’d gone about 100m off course at the start.

I stopped for a sec just before the big pink half mile buoy, to check in with a swimmer who was facing the wrong way and looked a bit uncomfortable. His hat and goggles kept coming off. ‘Stuff your hat down your wetsuit and put your goggles on first’ I said. Cold water stops you from thinking straight if you’re not used to it. I think it helped as he did that, and we swam on together for a while.

Past the pink buoy (had I really got there already?!) was the spectator beach. I slowed down to look for my husband and daughter. I didn’t want to lose momentum but didn’t want to miss a chance to wave either. After a minute of coasting I still couldn’t see them, so I shifted up a gear again and swam on. I started to pass the yellow-hatted tail end of the previous wave. They were breast stroking, by that point had been in the water for an hour, and must have been getting cold…

The three quarter mark came up fast as I passed more and more stragglers and overtook a few more of my own wave. Was that really the end I could see already? Further away, two triangle buoys I’d mistaken for three quarter mile markers looked like they were actually marking the last 50m or so of the course. I was 100m from them. I had loads of energy left. I decided to sprint the last bit. My sprint actually isn’t that quick (I’m working on it!) but I’d had two stops and a beach cruise already so I had some lag to make up for. I got to the triangle buoys and was about to put my foot down for the end.

Then as I turned to breathe on my left side I caught a glimpse of someone splashing A LOT, out of the corner of my eye. A yellow hat. Holding onto the far triangle buoy, out of the sight line of the support boats. She looked panicked. I really wanted to keep sprinting. And I knew she’d get help soon. But I couldn’t do it. I stopped. ‘Are you OK?’ I shouted, from about 15m away. She looked at me. She really was panicking. ‘I’m really off course’, she shouted back. She wasn’t. She was just scared, I could see it.

‘SWIM AT ME’, I yelled back, and gestured. And she did it. I could see her kick off and change direction. She was going to be OK. I turned back and put my head down. Last 50m, it was almost over. I didn’t want it to be over. I wanted to carry on. I hit the end board over my head (always wanted to do that!) and stopped my watch. 36 mins 18 secs. Without the distractions and the cruise it probably would have been a minute less. No matter. I’d done it.

My neoprene socks meant I had to be helped up the slippery ramp, laughing. I’m 12 and a half stone, so it took two guys to drag me up. Hilarious.

I spotted my family, who were surprised I was out already (so was I!). I had done it! I wanted to do it again!

I felt great. I gave my medal to my seven year old daughter. I hugged my husband. It was time for a pint…